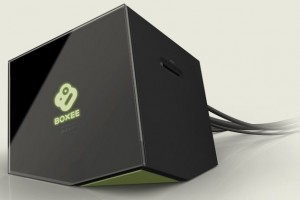 The Boxee Box is finally up for preorder from Amazon and those lucky Americans will have it in their homes by November.

I’ve loved the user interface for a while and I’ve been eagerly awaiting its arrival.

Just to recap before I get all carried away.

Boxee Box is a nifty little collaboration between Boxee and D-Link.

The Boxee Box will be loaded with an Intel Atom CE4100 SoC processor (the same you’ll find in the Google TV) and not the rumoured Tegra 2 chip. Nothing sinister about that apparently as the swap was due to concerns that the ARM chip wouldn’t play nice with H.264 decoding.

“The major problem we had with the Tegra 2 was support for high-profile HD playback,” Boxee CEO Avner Ronen told Engadget. “You can do high-profile VC-1 with Tegra 2, but not H.264.”

Though the device has a suggested retail price of $229, its expected “street price” is $199 – a full $100 more than the new Apple TV. That also happens to be the price for preordering from Amazon for US and Canadian customers starting today (with Europe and Australia to follow in November).

As it’s taken a year for the Boxee Box to appear there seems to be quite a glut of set-top boxes out there. Apple recently launched a new version of its Apple TV, and dropped the price down from $229 to $99. Roku’s flagship XR unit (which has its eyes on 1080p video access played though a connected USB hard drive) just had its price hacked to $99 (down from $129)

Talking about hacking – If youâ€™re after a more adaptable, tweakable device you should still check out the Boxee Box even just to play with its full-QWERTY remote. The Boxee software is seriously slick and can grab content from over 400 sources.

Boxee promises that a Boxee Box UK release date and price will bounce into the light come November.