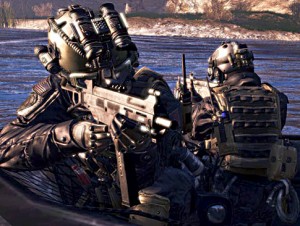 You can’t have gotten through this week without hearing about Call of Duty: Modern Warfare 2

I’ve not bothered mentioning it as everyone seemed to be doing that.

But I can’t fail mentioning this.

The latest episode of the popular shooty-shooty-death-kill game has experienced the biggest launch of an entertainment product in history!

It has managed to haul a huge $310 million in the space of 24 hours in the UK and US alone!

That only managed $158 million in the same period of time.

This amount was generated by 4.7 million units sold which is especially fantastic when you know that the market has been in decline in the last year.

In the UK 1.2 million copies were sold in the 24 hours following its release, twice the amount Grand Theft Auto IV sold in its first day.

Analysts predict that by Christmas, Activision will have sold around 12 million copies of the game.

Since its release, the game has been plagued with online difficulties. PC gamers were disappointed with the initial lack of online support, while the PlayStation Network struggled to deal with the sudden flood of online games.

Is it all that it’s cracked up to be?

Let me know your thoughts in the comments below 🙂