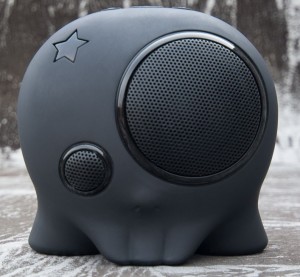 The BoomBotix Boombot2+ isn’t your run-of-the-mill garden variety Bluetooth speaker, no sireee. This soft-touch rubberised skull kicks out the beats a lot louder than you’d expect.

The BoomBotix BoomBot 2+ is available in a range of eye popping designs which are also customisable.

Not only that, they are water resistant and feature a handy clip so it can hang around with you.

The Boombot2+ looks cool and not unlike those collectable vinyl figures you can get.

I’ve got the aptly-named Blackout but there’s currently another 7 to chose from as well as being able to pop in some custom eyes.

The skull-shaped speaker stands 3.6-inches tall by 3.8-inches wide, and is 1.8-inches thick. 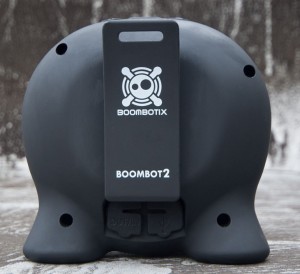 It’s made of hard ABS which has been coated to give them a more friendly soft-touch feel. There’s a belt clip on the back so you can attach it to your belt or bag strap and is keen enough to hold the 5.12 ounce (about a third of a pound) speaker where you clipped it. It’s a handy addition but I think it looks best when sat on the surface of something.

Thanks to its Bluetooth connectivity and on-board rechargable battery, which is good for about 6 hours after an hour’s charge, the Boombot2+ enjoys a wireless existance. This means its free to be taken wherever it’ll be needed.

The Boombot2+’s eyes house a 50mm 3Watt driver and tweeter and those grilles can be swapped out for some alternative eyes which cost £3.71.

On the top left hand corner is a star-shaped LED light which indicates several things, including when Bluetooth mode is on, when the battery is low, or when it’s done charging.

Up top is where you’ll find the mode change/power button and volume buttons. The mode button not only switches the Boombot2+ on and off but gets the skull chatting with your audio device via Blutooth and will even allow you to use it as a speakerphone.

On the back is the aforementioned belt clip and two ports: an auxiliary jack and a Micro-USB port for charging. 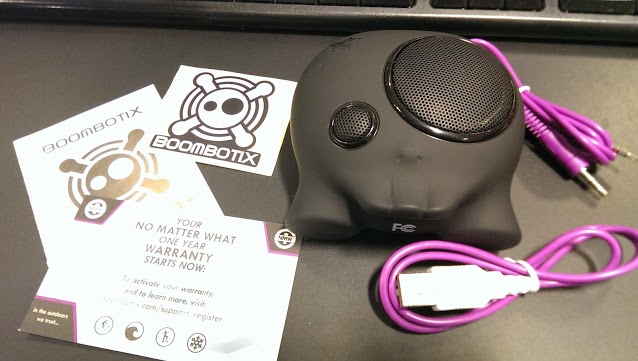 As well as the Boombot2+ itself you get the charging USB cable, double-ended jack cable so you can plug in a wired source if, say, your laptop doesn’t have Bluetooth, a warranty card which promises to cover your speaker “no matter what”, an instruction manual and a cute free sticker. 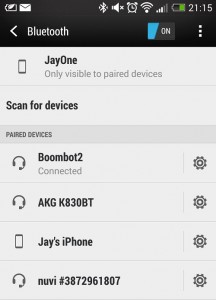 Setup was as easy as charging the Boombot2+ (green star) and then simply pressing the button once to turn it on and then quickly pressing it twice more in order to activate Bluetooth.

When the star flashes blue, Bluetooth mode is on. After you pair it with your device (BoomBotix’s instructions read that the device will show up as “BT-A2DP,” but it showed up on my handset as the more friendly Boombot2). After that, you’re good to go. 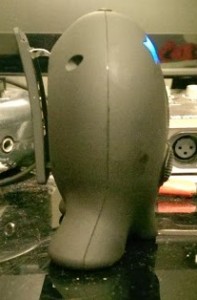 Well, that’s what BoomBotix site says. The sound quality on the BB2+ is better than I was expecting from what looks like a novelty portable speaker.

At maximum volume (5W max), the device can easily fill a decent sized room with music. At mid volume, sound quality improves and is rich and full of depth. There was no extraneous buzzing or tinniness.

Don’t expect bass that will rattle your fillings loose but sound reproduction isn’t thin and you get a good enough range.

Talking about range, Boombotix reports that the speaker’s range is about 30 feet with no walls in between and that seems about right to me.

On Bluetooth, the BB2+ has a reported continual play time of around 6 hours, depending on volume. With a headphone connection, its battery time bumps up to about 8-or-so, and it takes about 1-1.5 hours to regain a full charge. 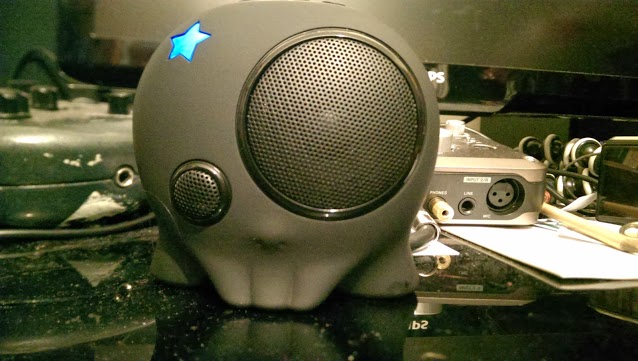 The Boombot2+ certainly does draw attention thanks to how to how it looks – and also by how it sounds.

It will never replace an audiophile speaker but it hasn’t been designed to. This wireless speaker has a fun and slightly outsider, renegade vibe to it. I am guessing that the Boombot2+ has been targetted on the teen/ more rebellious demographic.

The BoomBotix Boombot2+ Blackout costs just shy of £44 and there’s limited and special editions to be had too!