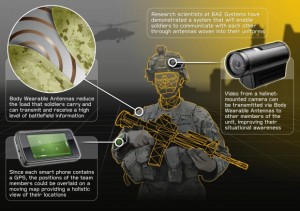 If you’ve watched any war movie the sight of the radio operator dragging around a box with a long whip aerial will be a familiar one. BAE Systems would rather soldiers wear their aerials stitched into their fatigues.

The clever types back at British military company BAE Systems have developed different types of wearable antennae that will not only reduce the load that soldiers have to carry on the field but allow them to hook it up to pretty much any phone for communication, video chat and augmented reality.

BAE says that the new system will work with “many commercially available mobile phones” – so, if it gets boring in your sniper hole then a quick game of Words With Friends may calm the mood.

The body wearable antenna (BWA for those in the know) works by weaving the antennas right into the very fibres of the soldier’s uniform. This is a fantastic development as those radio operators may as well attach a huge target   flag on their current aerials!

The antenna can transmit various types of information, such as voice signals, video from a helmet-mounted camera, and the soldier’s GPS location.

The BWA teamed-up with a wristphone will definitely bring those visions of futuristic battlefields to the present day!

Data isn’t just beamed back to base: members of a squad can communicate with each other – they can even link into their fellow squaddie’s helmet-cam to see what the situation is like on their side of the battleground. They can also tag stuff (no not on Facebook!) that could make things tricky or be possible targets and have them show up on other soldiers’ phone displays and so warn them of danger or pass on up-to-the-minute intelligence.

The BWA isn’t just for military use as BAE Systems reckons that the emergency services could well be kitted out with the wearable antenna. This means that the gaps in communication faced by fire-fighters, police officers and ambulance crew and paramedics during the London bombings could be avoided and the system could also roll out to miners as well as oil and gas workers and others employed in hazardous and extreme environments.