Blueprints of Apple’s new iPhone 5 Leaked – The Rumours are True! 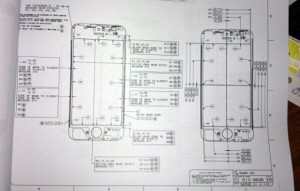 A blueprint purportedly showing Apple’s next iPhone has appeared online, providing yet more evidence that the company’s next effort will feature a taller casing with a 4-inch display.

The plans have been acquired by Cydia Blog and adds further credence to the leaked photos that appeared the other day.

So far, the likelihood seems to be that we’ll get a longer iPhone that retains the current display width. Some folk that are happy working with numbers state that this would give the new iPhone screen a 16:9 ratio when you lay it  on its side.

Further facts and figures result in the 90.1×51.42mm “active area mask” where the phone’s display will be attached corresponds to a diagonal length of 103.74mm, or 4.08-inches which fits earlier rumours.

MacRumours points out, the viewable display will probably be a bit smaller than the casing’s opening because of a bezel, etc, so a screen measuring around 4-inches would also fulfill the prophecy.

Other details that match the earlier leaks are the front-facing camera being moved into the centre of the phone’s frame, and the oddity of the headphone socket being moved to the iPhone’s underside. I am happy to see the metal stripe across the phone’s rump being present on the drawings though.

OK, so it looks like we could be getting a taller iPhone next but is that alone worth getting excited about?

Display aside, it will be what Apple shoves under the bonnet and what iOS 6 has in store for us being the deciding factor of whether or not to put my hand in my pocket. Thankfully all will become apparent on 11 June, when Apple’s tipped to show off their new operating system and, hopefully, the new fruity phone 🙂