Blu-Ray Flippers – DVD on The B Side 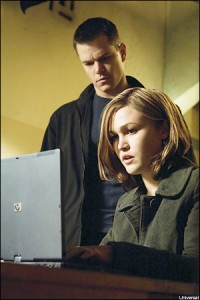 I’m going to have to try and resist the urge for water-based mammal puns throughout this article.

Universal has unveiled the first Blu-ray/DVD ‘flipper discs’ – so named because they’ll be packing both the Blu-ray and DVD versions of a film on the same platter.

No accident – they did this on porpoise.

Anyhow, A flipper disc is a single, dual-sided disc that has Blu-ray on one side and DVD on the other.

This means that you can watch the movie on your fancy la-di-dah Blu-ray player but also loan it to a poorer friend who can only afford to own a humble DVD player or even use a laptop to watch the flick as Matt is showing in the pic.

The Bourne Identity, The Bourne Supremacy and The Bourne Ultimatum have been given the seal (sorry) of approval to be the first films to benefit from the new technology.