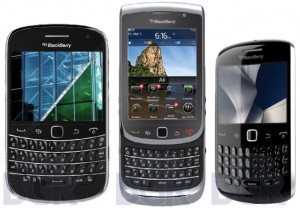 Did my report about the BlackBerry Dakota get your juices flowing?

Well, better fetch a cloth as those people over at BGR have done some more snooping and uncovered another three BB’s that will be joining Dakota over the coming year 🙂

It looks as though Dakota will become the next gen BlackBerry Bold and shots of the Torch 2, Monaco (or the new BBerry Storm) and Apollo (the new Curve) are all presented in preview publicity pics.

Apart from them being new and shiny what does this early leakage tell you about what to expect from the 2011 RIM line?

Well, only Monaco will shake free of the world-renowned BlackBerry physical keyboard. Dakota, as we all already know, will have the best of both worlds being equipped with a touchscreen and the famous signature BB QWERTY pad.

Users will be able to swap info easily with each other (business cards, phone numbers etc.) wirelessly by holding their two handsets next to each other. Where this is hardly bleeding-edge tech (anyone else use Bump?) RIM are looking to use the same technology to allow users to make payments (as with and Oyster card) or use their Berries as keycards. Now we’re talking 🙂

Hardware-wise, all the processors lie between the 800MHz – 1.2GHz range and all seem to be fitted with 5MP cameras.

Yeah, I’d have to agree with what you’re probably thinking. If these new BlackBerries are to be released in Q3 of this year those specs aren’t exactly pant-wettingly exciting are they?

Imagine – this line-up will be facing the competition of iPhone 5 and a whole slew of new Androids – some rocking dual core processors.