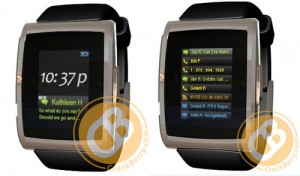 Now, most people know that RIM wouldn’t be so frivolous as to go for a trendy, fashionable gadget and turn its back on the serious business market.

So what the heck is this wristphone, phonewatch nonsense all about then?

This is what CrackBerry wrote on their knowledge-fest of a site:

â€¢ It was designed “specifically for BlackBerry from the ground up,” by a “new BlackBerry-dedicated accessory company,” and could be branded as the “inPulse.” This sounds suspiciously like BlackBerry wanting a watchphone, and outsourcing the design and manufacturing expertise.

â€¢ It’s got a large (but hopefully not too large) OLED screen, with a high enough resolution to display text clearly

â€¢ Its primary purpose is to display messages from a paired BlackBerry.

So – it’s not a BlackBerry branded standalone wristphone such as the LG GD910 but a screen so you can read messages without having to rummage in your pocket.

Crackberry describes the shots as “actual renderings of the real deal” – which is kinda like saying these are really real ideas.

That also means that there’s no real tech specs, price, eta or whether RIM will slap the BlackBerry logo on it.