BlackBerry Triton 4G out in December 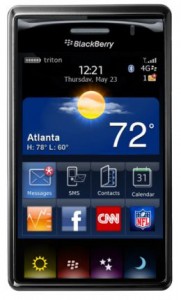 I’ve recently been prodded in the ribs by a reader accusing me of forgetting to report about BlackBerry products – even though I’m Canadian!

Well Paul, just for you – how about the news that RIM’s planning to release a 4G connected smartphone codenamed the BlackBerry Triton?

Industry analyst, Samir Sakpal claims that the 4G empowered BlackBerry Triton is to land in December and will be rocking iPhone taunting 5-megapixel rear and front facing cameras.

The Frost & Sullivan analyst says the Triton is expected to offer functionality designed specifically to help it compete with Appleâ€™s iPhone 4. â€œThe word is that they will have features such as a 5.0 megapixel camera with both front and back imaging, similar to the iPhone 4â€¦ for videoconferencing,â€ he goes on to say that â€œWhen you have 4G and you know for sure that there will be a lot of data consumed by usersâ€¦ you can expect to drive down your costs with the efficiency of the BlackBerry platform, which can provide optimum usage of data,â€ Sakpal says. â€œThatâ€™s a crucial advantage for BlackBerry over its competitors, and enterprises will definitely want to take advantage of that.â€

The UK is still not 4G savvy yet so don’t expect it to make a massive difference here; but this is still a huge step for RIM and shows that the Canadian company isn’t scared to take on the mighty HTC EVO 4G handset which is seeing huge popularity in the states.

With the rumoured list of capabilities it could take the BlackBerry more into the casual user marketplace as well as keeping its well-earned place as the business handset of choice.

What would you add to my list of BlackBerry Triton 4G features?