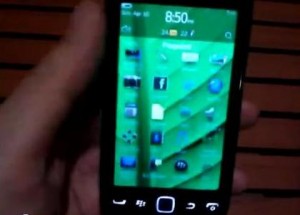 There have already been some blurry spy shots of the BlackBerry Touch 9680 but here’s the 9680’s debut on the silver screen!

The successor to the BlackBerry Storm successor has already been crowned as the very best ‘Berry.

Looking at the vid clip it does look pretty good.

The interface appears uncluttered and fairly slick, the icons are clear and everything seems to flick around as it you’d expect a phone to do in 2011.

BlackBerry really does seem to have upped its game in the realm of the touchscreen .

The hardware design is BlackBerry enough to know you’re touting a RIM machine but it also wont be shamed in the top-of-the-desk test.

Rumours are pointing to some decent gear under the hood to match its looks – how does a 1.2GHz processor, NFC tech, 3D graphics and a 480×800 screen grab ya?

The big unveiling of the BlackBerry Touch 9680 is expected to happen at the BlackBerry World gathering next month – expect there to be more reveals as the date gets closer.

Check out the vid and let me know what you think.