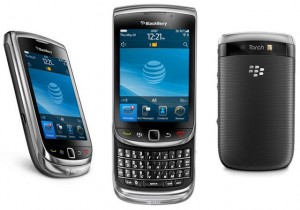 Say a big hello to RIM’s latest – The BlackBerry Torch.

The new BlackBerry Torch features a 360×480 touchscreen, a slide-out keyboard as well as the groovy BB OS 6.

The Torch is equipped with a 5 megapixel camera which is kept company by a flash.

It all runs along on a 624MHz processor with 512MB of memory. You get 4GB for storing all your stuff on and there’s also a microSD slot which can give you an extra 32GB of room.

You can run the new BB for up to six hours of constant chatting or 30 hours of tunes.

Connectivity-wise the BlackBerry Torch can hook up via Bluetooth and WiFi B/G/N.

I’m not usually a huge fan of the BlackBerry’s aesthetics to be honest and, whilst the brands renowned QWERTY boards do a fantastic job, I think they generally spoil the look of the handsets.

It looks like if you’ve used a top-end multi-touchscreen phone before everything will seem familiar. Perhaps some of the gestures (like spreading your fingers to zoom) may be a little too familiar for the litigation department at Apple 😉

You can register your interest via the Vodafone website.