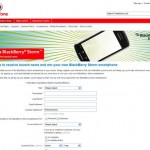 Vodafone UK has launched a microsite giving readers the chance to win their own touchscreen BlackBerry.Â

This sly site comes after several months of leaked photos and spy-shots showing up across the interweb.

Funny thing is that neither party has actually formally announced the touchscreen model, however Vodafone’s microsite is the closest I’ve seen that confirms it.

You can also register for news updates about the handset, however there’s no details on the site giving away further information such as pricing, availability or even hard specs.