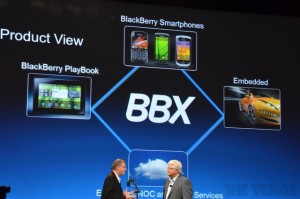 It looks as though RIM is breaking free of the expected QWERTY business-phone form which they are renowned for – also their new super smartphones will be powered by the Canadian BlackBerry cobblers new BBX operating system.

Somewhere in a secret location there’s a bunch of designers beavering away over the next generation BlackBerry phones and it sounds like they’ve been told to avoid sketching another Bold-alike (although the Porsche version looks sweet!).

What these new handsets will be packing, however, is PlayBook-like screen resolution and ratio in a bid to claw back some ground on the big boys.

The new BlackBerry phones are promised to be slimmer, touchscreen affairs as well as sporting that 1024 x 600 pixel screen and 16:9 aspect ratio first experienced on the company’s PlayBook – according, Alec Saunders, the Vice President of Developer Relations and Ecosystem Development at RIM. He was keen to point out that the new RIM mobiles will continue to support the ever faithful BlackBerry Enterprise Server.

The new BBX operating system, which announced last month, is based on the company’s QNX platform as found on the PlayBook. This means that any apps built for OS 7 and below won’t work – instead the ones designed to function on the PlayBook will play nicely.

It does seem that BlackBerry’s famous QWERTY keys are not a feature of their future plans.

Will the keyboards be missed by the BB faithful or do you think it’s time that RIM went totally finger-friendly with their screens?