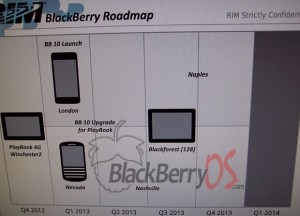 The last I heard was that RIM was considering moving to Windows Phone – but it appears that they intend to unleash a supersized BlackBerry PlayBook according to leaked plans which also detail new BlackBerry 10 phones.

The new BlackBerry roadmap has found its way on to the interwebs and it seems that both BlackBerry OS 10 and the PlayBook seem to be happy and well.

The company roadmap reveals the biggest BlackBerry gadgets for the next year, as well as their release dates.

For instance, this winter you can expect to see a 4G version of the PlayBook (more likely if you live in the US), with the first BlackBerry 10 mobiles launching early in the new year.

Those promised handests will be the touchscreen-sporting London and the more trad BB QWERTY-loaded ‘Nevada’.

RIM has already said the first BB10 phones will be touchscreen-only, so that’s the London landing first then.

The Blackforest is next on the map and this may come as quite a surprise for those that have witnessed the whimper and fall of the PlayBook. Judging by the icon on the presentation it looks as though the Blackforest is larger than the PlayBook and the ‘128’ could point to its storage capacity. We will have to wait until another leak or the third quarter – that’s Julyish to Septemberish to regular folk like us 🙂

The ‘Nashville’ and ‘Naples’ are also shown on the roadmap but their form remains a mystery.

Everyone knows that the Canadian tech builder is having a hard time of it but is a larger PlayBook the answer? You tell me.