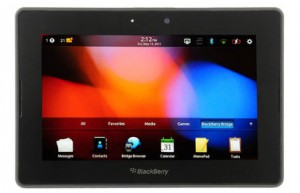 Like the look of the BlackBerry PlayBook but shuddered at the £400 starting price? How about when it’s almost half price?

Yessiree! RIM’s BlackBerry PlayBook tablet, you know, the one that previously had an asking price of £400 and upwards has now had its price tag clipped by £150.

I know that £250 could easily be better spent on groceries and/or beer so how does a FREE PlayBook sound? To get that particular deal you just have to buy a BlackBerry Curve on a £31 p/m contract.

The best bit is that the PlayBook tablet is looking to get access to Android apps which can only help its cause as the amount of apps out there a minimal and the PlayBook will generally only play nice with its handheld RIM stablemates.

Is the price enough to help you forget that the PlayBook arrived needing you to connect your BlackBerry phone to the tablet to use normally default features such as Calendar?

Check out the deals here.