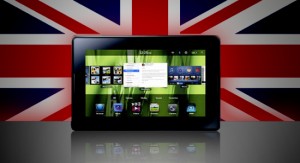 RIM have announced the Canadian company’s UK release of their first entry into the increasingly crowded tablet market with the BlackBerry PlayBook.

The Playbook comes with some unique features that sets it apart from the myriad Android tablets out there as well as poking its tongue out at the mighty iPad. Business users will perhaps dig the advanced security features and enterprise support where most people will appreciate that all models comes with WiFi built-in as well as playing nice with Flash.

The PlayBook will be released with the 16GB offering landing with a pre-VAT price of just Â£329.99 at Insight UK.

Carphone Warehouse, Best Buy, Currys and PC World will all stock the 16GB, 32GB and 64GB PlayBook’s pricing them at Â£399, Â£479 and Â£559 respectively. Phones4u will only give shelf-space to the 16GB and 64GB tablets whilst adding 95pence to the price.

Most stores are offering the opportunity to pre-order your PlayBook – I just hope that RIM have ironed out the software bugs after having to recall almost 1,000 faulty BlackBerry PlayBooks in the US after it emerged the tablets were shipped with faults to the operating system.

You going for it on June 16th? Business or pleasure?