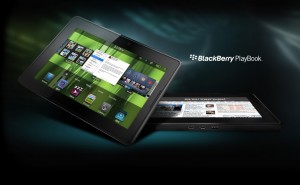 RIM’s BlackBerry PlayBook has been given a due date in a report that hints at its QNX fuelled operating system might need an update as soon as it is unpacked.

If that’s not enough HP has already taken a swipe at the PlayBooks OS as they claim that someone at RIM has obviously spent a long time with HPs webOS which was developed by Palm.

Both HP and RIM were asked about the similarities between webOS and QNX.

HPs TouchPad Director of Markrting, Jon Oakes said: “From what we’ve seen in the market, there are some uncanny similarities,” Oakes goes on to say: “It’s a fast innovation cycle and a fast imitation cycle in this market, so we just know that we have the creative engine here to continue to build on what we have, and we’ll keep innovating, we’ll keep honing and those guys hopefully will continue to see the value in it and keep following us by about a year.”

Hmmm….. Jon’s not pulling any punches.

RIM’s response was delivered by SVP for Business and Platform Marketing, Jeff McDowell. “I feel that we set out from the ground up to define a user experience that we felt would delight our customers, and we landed in a place that may look like other competitive devices. But there was no intention and no preconceived notion that this is what we want to end up looking like.” Dowell goes on to explain: “When you’re trying to optimise user experience that juggles multi-tasking, multiple apps open at once and on a small screen, you’re going to get people landing on similar kinds of designs”.

So we can expect every operating system to look the same in a year or so then in that case eh?

As for that release date – “multiple sources” have confirmed a date of 10 April for retail launch.

“Additionally, we’re told the OS goes GM [gold master, ie ready for public consumption] on 31 March and that when you boot up the device right out of the box, you’ll be prompted to upgrade to a newer version of the OS.”

To me that sounds a bit wrong. I kinda get the Nintendo 3DS update coming 2 months after its UK release as that’s been out and about in other territories – but a brand new bit of kit needing an update right on release?

I should add that RIM has not announced an official launch date yet or where will get the PlayBook first – neither has the BlackBerry builders confirmed the requirement for an instant update.

As soon as I know so shall you good Gadgety folk 🙂