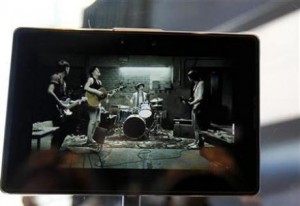 After a bunch of whispers sent tongues-a-waggin it seems that the lovely looking BlackBerry Tablet OS, as unleashed with the new RIM PlayBook earlier this week, will land on BlackBerry mobiles.

Apparently the source of this confirmation is an unnamed RIM vice president.

The QNX-built operating system will be the chosen OS on all BlackBerrys eventually.

This man in the shadows also added that the swap from from BlackBerry 6 would take some time and we should all be prepared to see BlackBerry 7 before the full transition happens.

Personally I think doing an Apple and having the same OS on the tablet and phone would be the better move and after the luke-warm reception to BlackBerry 6 would suggest moving everything over to the new OS sooner, rather than later would make more sense.

RIM would argue that reheating versions of their phones (Bold and Curve) has not hurt their share of the market – but with so many phones jostling for position in the smartphone race – surely anything to stay ahead of the crowd would be a good thing?