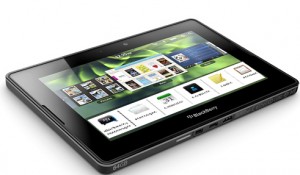 I was originally excited by the BlackBerry PlayBook and thought that between the RIM tablet and the Motorola XOOM the iPad may have been hit with a competitive 1-2.

Now news reaches me that when the PlayBook lands on North American shelves on April 19th it wont be the complete offering.

Word from the Canadian tech cobblers announces that early PlayBook adopters will have to use the on-board BlackBerry Bridge software to access email, calendar and contact apps from their BlackBerry smartphone as the BlackBerry slate will be lacking these at the offset. Huh?

RIM does say in the same document:

â€œIn a future software update for the BlackBerry PlayBook, we will also provide native e-mail, calendar, and contact apps for those customers who prefer to have these apps directly on the tablet.â€

Not a big deal if you’re already a CrackBerry addict but will this hit the potential market for those looking for an iAlternative?

Are you already a RIM fan and going for the PlayBook as soon as it’s available or would you rather wait til it’s finished?