BlackBerry PlayBook Gets AIRed and SDK Flashed at Adobe Show 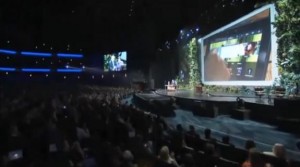 RIMâ€™s BlackBerry PlayBook has had its maiden voyage today and took centre stage at Adobeâ€™s MAX conference in Los Angeles. This coincided nicely with the deviceâ€™s SDK being released to developers.

As I mentioned only yesterday – the PlayBook supports Adobe’s Flash and AIR and RIM seem to be hoping that will set it apart from its competitors (iPad).

The operational demo does look rather slick I have to admit.

Developers looking to produce content for the BlackBerry PlayBook can now download the deviceâ€™s SDK and RIM co-CEO, Mike Lazaridis, promises that all those that get their PlayBook app approved into the BlackBerry App World will be handed a freebie RIM tablet.

Check out the vid: