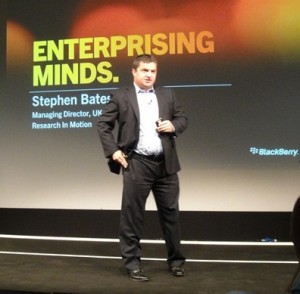 If you are one of the many BlackBerry owners you may be glad to hear that UK managing director of RIM, Stephen Bates, has apologised for the service disruption to email browsing and BlackBerry Messenger across Europe.

If you own a non-RIM handset you may be unaware that BlackBerry users have experienced network outage over the last few days – whether you rock a ‘Berry or not chances are that you’ll all probably agree with Bates that this situation is simply “not acceptable”.

Stephen Bates spoke out at the third annual BlackBerry Innovation Forum and claims that RIM is “working hard around the clock to resolve the issue” and that the company is “not going to stop until they get to the end of the problem”.

However, the EMEA-wide issue may still take a while to resolve. Bates promises that during the fix RIM will do their utmost to keep its rather miffed customers informed of progress: “We will continue dialogue through carrier partners,”. The MD goes on to say that the company will be “doing their best to improve communications, with updates on Twitter and Facebook” – BB owners will have to use their computers to keep up-to-date obviously 😉

Apparently the huge system b0rkage was caused by a core switch failure within RIM’s infrastructure. Although the system is designed to failover to a back-up switch, the failover did not function as previously tested. This meant that there was a huge backlog of data which has to be cleared.

I know a number of my friends have been affected – how about you?