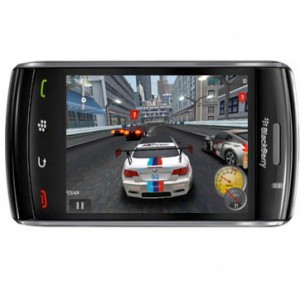 Now, here’s something that doesn’t usually appear that often (at all) on this site………

A game from a a big name franchise.

Yup – hold onto your shorts Crackberry addicts as Need For Speed Shift 3D has just landed on the BlackBerry App World for any of you wielding a Blackberry Storm 2 in the UK.

With Need for Speed Shift 3D you get the chance to powerslide eight different cars around tracks in Chicago, London, Dubai and Italy, and race in either third person, or first person driver view.

Itâ€™s a remarkable first for BlackBerry not because of the big name franchise, but this the first time that a BlackBerry game has made use of OpenGL 3D graphics.

Check out the video below and you’ll be able to see that this could rival an iPhone game and no more will you be stuck on your Blackberry playing Poker or some Tetris clone.

But itâ€™s also deep breath and deep pockets time as Need For Speed Shift 3D costs Â£7.09 and only runs on the BlackBerry Storm 2.

On the plus side this is a huge step forward and with rumours of BlackBerry OS 6.0 being whispered around the interwebs this could be the start of something beautiful.