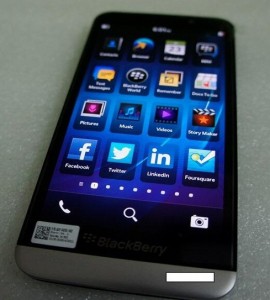 The BlackBerry A10 is RIM’s planned latest and greatest and it has just popped up in a series of leaked images and a video. Frankly, it doesn’t look too bad, actually.


The new A10 smartphone is rumored to be a bigger and faster flagship smartphone for BlackBerry and these latest images reveal more detail than the previous blurry-cam shots.

If you like the styling of the Samsung Galaxy S4 then you’ll probably dig the A10. The new RIM device seems to also nod to the HTC One with its chromed chin.

The A10 is rumored to pack a 5-inch AMOLED display, a dual-core processor, and 2GB of RAM, and it has been mentioned that it could arrive some time before the end of 2013.

Vietnamese gadget site Tinhte seems to have an uncanny knack of getting hands-on with phones ahead of launch and has managed to commit the A10 to video, which you can enjoy below.

Let’s see if the A10 proves popular enough to save the ailing Canadian company.