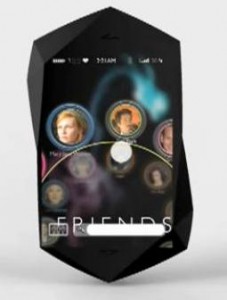 If you think that RIM is lagging behind in the sexiness stakes with the business-like Blackberrys then perhaps a little Empathy is needed.

Nope – I’m not getting all huggy and soft now that winter is here, but Empathy is the name given to this concept RIM handset dreamed up by Kiki Tang and Daniel Yoon.

The designers explains state that it’s: â€œtouch-based and all the userâ€™s connections are shown graphically so you can see who is connected to whom. Each contact has an avatar that is encompassed by two coloured rings. The inner coloured ring shows the contactâ€™s previous emotional state and the outer ring represents the contactâ€™s current emotional state. It is important to show the shift in emotions in order to see how an event has affected that contact.â€

They go on to highlight that: â€œAnother important featureâ€¦[is] the Emotional Health Chart. This chart would monitor the userâ€™s emotional health through an indefinite period of time. One would be able to see how a certain event or phone call has affected the user. Obviously, if the chart shows someone is always upset, there would be a problemâ€¦if permitted, a user would be able to view other users charts as well.â€

This would really make a break in the current BlackBerry line and I’m certain that the people wowed by Android, WinPho7 and iOS devices may find themselves deeply empathetic all of a sudden if this was commissioned.

Are you brave enough RIM? Well, are you? 🙂

Ok – so, some of the tech is not viable just yet but hey; there always needs to be a v1 hasn’t there? 😉