BlackBerry Curve 9320 – Can the Baby Berry Hack it? 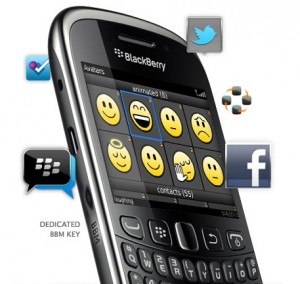 The BlackBerry Curve 9320 is RIM’s entry-level offering. It has most of what you’d expect from a CrackBerry but without denting your bank account. Here’s what you get from the baby Berry.

The BlackBerry Curve 9320 replaces the popular 9300 with a refreshed body design which brings it nicely up-to-date. It does still look up to its thinner higher spec’d sibling the Curve 9360.

I’m not saying that the 9320 is a little chunkster though. Its vitals are 109 x 60 x 12.7mm, true, and it’s not likely to win Slimmer of the Year – but it will fit every pocket without troubling your tailor.

I like curved backs on phones and the Curve will sit nicely in your hand allowing you to bash out BBMs to your heart’s content.

The Curve 9320 lands running BB OS 7.1, the latest version of the BlackBerry software, the biggest new addition to which is a mobile hotspot feature so you can share your connection with other devices – but 10 is waiting in the wings 😉

The baby Berry has the usual BB controls consisting of a central navi-key partnered by the common arrangement of calling keys, menu and back.

There’s a couple of shortcut, or convenience keys either side of the 9320. The one on the left is labelled as “BBM” which squirts you directly to RIM’s instant-messaging service, with the one on the right-hand side defaulted to the camera; both can be reassigned to different functions if you’d rather.

Thankfully there’s a slot to shove an SDcard – not that you’ll be filling it with an array of apps as BlackBerry still has a long way to go on that particular playing field.

For the snap-happy of you out there you are supplied with a 3.2-megapixel fixed focus camera. It’s perhaps not the best for aspiring David Baileys, but functional enough for sharing on your preferred social site.

Video will max out at 640 x 480 pixels but will suffice for social sharing.

What the BlackBerry Curve deals with best is communication – this is where the Curve 9320 has got game.

BB7’s integrated inbox will pull your messages and alerts into one stream so there’s no need to jump back and forth to keep in the loop.

The Curve 9320 already has Twitter, Facebook, Windows Live Messenger, Yahoo! Messenger and Google Talk preinstalled and ready to rock right out of the box.

There’s also the teen dream of BlackBerry’s excellent Messenger service, BBM, which will likely be one of the most popular features of this device and can be connected in to Facebook and Twitter to keep your mates updated.

Naturally, email is the other power play from RIM thanks to quick and easy connection to your Exchange or third-party email provider, such as Google.

So, in short, if you’re looking for a relatively inexpensive communication device (it is a phone after all) with the usual BlackBerry strengths – then the Curve 9320 may be worth checking out.