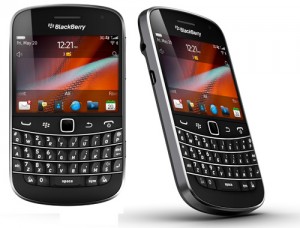 RIM has been very busy and have just unveiled the much anticipated BlackBerry 7 operating system as well as some new mobile phones!

Research In Motion announced that BB 7 OS will launch with its five new premium handsets loaded with the new software later this month.

This is definitely a big deal for the Canadian tech company – word is that this will be the largest ever global launch for them.

RIM’s thinnest handsets (a skinny 10.3mm) get a new duo in the BlackBerry Bold 9900 and 9930. Both are media lovers and shows that there’s time for play as well as work. They come equipped with a HTML 5 web-browser that’s 40% faster than the previous OS. RIM have also managed to squeeze in new Liquid Graphics tech, a touchscreen and their much applauded keyboard into that slim shell!

More? How about NFC gubbins, 8GB on board memory which can be bumped up 40GB with the aid of microSD, 720p video and 5MP pics, and a poppin’ 287ppi screen?

A trio of Torches have been flashed around – here’s a quick summary of RIM’s new light bringers.

The Torch 9810 retains the 3.2in touchscreen, thumbable slide-out QWERTY and 5MP camera of its forebear but there has been tweakage under the hood. The 9810 is rockin a 1.2GHz processor which should set it on a more level playing field with the other smartphones in the market.

In fact the steroids have been past amongst the Torch family as  the new range are now endowed with HD video recording capabilities, 24-bit hi-res graphics as well as BlackBerry OS 7.

The 9850 (dual-band) and 9860 (tri-band) stand out from the 9810 as these have shed the QWERTY keyboard and gone totally touchscreen. These will replace the Storm range and come packing a 3.7in screen paired with 4GB of built-in memory.

All-in-all the new BlackBerry handsets offer a faster, more fluid web browsing experience and with the BB 7 OS the user should enjoy enhanced zoom and web navigation options alongside Liquid Graphics technology for an improved touchscreen interface and smoother graphics.

“This is the largest global launch of BlackBerry smartphones in our history,” said Mike Lazaridis, President and Co-CEO of Research In Motion. “The BlackBerry solution offers a best-in-class mobile communications experience that customers love and we think they will be thrilled by the faster performance, enhanced browsing and richer multimedia delivered by these powerful new BlackBerry Bold and BlackBerry Torch smartphones.”

Other new features that arrive as part of BlackBerry 7 OS include the revamped BBM service as well as Facebook 2.0 which will introduce the social network’s Chat option to BlackBerry users for the first time.

So – is BlackBerry ownership looking more tempting? Are you a life-long CrackBerry addict and these new features and handsets are just making it more difficult to go cold turkey?