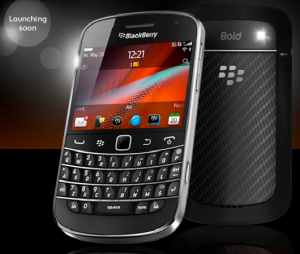 RIM has officially outed the BlackBerry Bold 9900 and 9930. The touchscreen and QWERTY keyboard-touting twins have been announced at the annual BlackBerry World conference in Florida.

We all knew that these were on the cards but now that they’re really here what have RIM got in store for us?

BlackBerry have kept the best bits from the previous Bold and Torch such as the high-performance keyboard but have added a nice looking 2.8-inch capacitive touchscreen display with 640 x480 resolution into the mix.

Casing the keyboard and the screen is a 10.5mm brushed stainless steel frame with a high-gloss glass backplate with a groovy looking carbon fibre vibe going on.

Under the bonnet is a 1.2GHz processor with 768MB of RAM. There’s 8GB of onboard memory, along with a microSD card slot for storing up to 32GB of data on – the photos and HD 720p video you can shoot on the 5MP camera for instance. Thereâ€™s also support for high-speed 4G/HSPA.

As well as being first with BB 7 OS, the Bold 9900/9930 beats the rest of the RIM pack with the use of NFC for contactless payments.

There’s the normal list of goodies to be expect on a top rank smartphone – GPS, Wi-Fi and Bluetooth, along with an accelerometer, digital compass and proximity sensor

Expect the Bold 9900 and 9930 to be available worldwide during the summer – no prices or precise release as yet though.

Check out the BlackBerry UK site 🙂