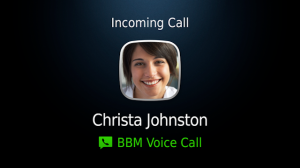 BBM seemed to be the driving force for BlackBerrys to make the move from business tool to teen telephone and a slick new feature in BBM 7.0 could potentially save RIM’s smartphone. Please welcome BBM Voice.

You will probably be familiar with BBM (BlackBerry Messenger) which caught quite a lot of press during the London riots last year. But now, not only will BBM be enabling free texts it will now offer free voice calling over Wi-Fi.

BlackBerry Messenger 7.0 is in open beta as of today

Following on from BBM’s trailblazing platform-specific messaging service and its text cost savings, RIM’s new integrated Wi-Fi calling solution could provide a simple way for users to save on voice minutes — as long as they’re hooked up to Wi-Fi.

Calling from BBM looks simple enough and I like the fact that users are able to jump back into chat to send images or other content.

Free mobile calls to your friends and family overseas? How good is that?

OK, so there’s already a wide variety of VOIP apps out there, but if you’re already familiar with BBM then having BBM Voice baked-in to your BlackBerry is certainly going to be a good thing.

That’s especially true for users in developing markets which I am sure RIM has its eye on.

In addition to BBM Voice, BBM 7.0 also features other minor tweaks such as merging the user’s BBM ID with their BlackBerry ID (which is typically used for buying apps). Now, a user’s BBM contact list and groups will all be linked to a BlackBerry ID — so when you update your phone to BB10 or purchase a new device, you will be able to restore your BBM to how it was when you left off.

If you want to try out BBM 7.0 you will need to be running a BlackBerry 6 or BlackBerry 7 device, and RIM said it was planning to support BlackBerry 5 devices down the line. RIM’s also planning a “relatively short” beta period, with planned availability before the end of the year.

There was no real mention of the upcoming release of BB 10 or the new BlackBerry range.