BlackBerry 9670 Style by Name… and That’s About it! 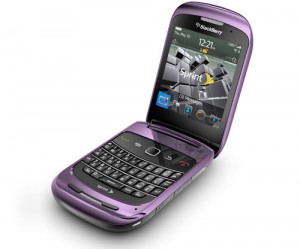 I think RIM were being ironic when they decided to call their clamshell BlackBerry ‘Style’.

The BlackBerry Style 9670, to give it its full name, is the first CDMA BlackBerry to launch with BlackBerry 6 and is also the first flip phone from Research In Motion to feature a full qwerty keyboard.

This teen-targetted flipper has two screens. One is the 2.7-inch QVGA on the inside whilst out front is a 2-inch QVGA.

Tasks such as new messages and caller info are taken up by the one outside with the larger inny being your main work-screen.

Don’t be expecting the touchscreen-ness of the Torch as this is aimed at pocket money and weekend jobs rather than grown-up budgets.

The 9670 Style does get a 5MP camera with flash, GPS, Bluetooth and Wi-Fi, and comes with an 8GB microSD card.

On sale October 31st as an exclusive Sprint handset in the states and it’ll cost $100 after a $100 mail-in rebate.

The tastelessness continues in the ad below – you have been warned!