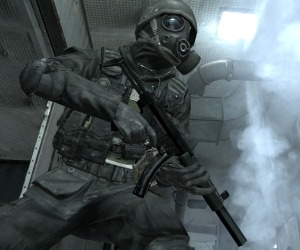 Nintendo Wii users will not be feeling the love as they watched the pre-order listings appearing for all but them.

The Modern Warfare 2 follow-up, Call of Duty: Black Ops, will be hitting the other consoles built by Microsoft and Sony as well as on PC but, as with last year’s title, Wii owners will have to go visit a friend to have a go.

Activision’s recommended UK price is Â£54.99 but the likes of Amazon.co.uk

have already knocked a tenner off the RRP for pre-orders. The game is released on 9 November.

Remember when Modern Warfare 2 hit the shelves supermarkets went halved the RRP, and as that worked so well I’d guess Call of Duty: Black Ops might just follow suit with a hefty price cut so I’d suggest holding back a bit unless you’re really that desperate to spend the folding 😉

Black Ops is reportedly set during various periods of the Cold War and apparently features gameplay in Cuba, the Arctic and Vietnam as well as the famous Iranian Embassy siege in London.

Check out the teaser vid: