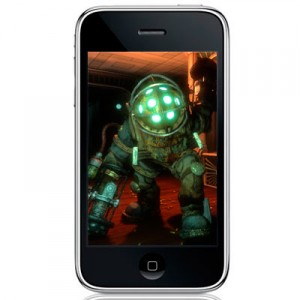 Games for the iPhone are just getting better and better!

While I’m still getting over the release of Metal Gear Solid TouchÂ there is news that Bioshock might be appearing on the Appley hand-held!

Yup, you heard me Gadgety faithful!

It has dropped theÂ jaws of PC, Xbox and PS3 players but nowÂ IG Fun appears to be in the driving seat forÂ the mobile version of Bioshock, including a 2D version – in that case the super-duper iPhone should handle it and then some 😉

Ok, so maybe I’m getting carried away here.

There’s nothing really official at the mo.

Errrrrrrrm…………so it is happening and you’re keeping it a big secret huh?Â  🙂

So, will it be a scaled down 2D version or are IG Fun going to work some magic and shrink the huge 3D First Person Shooter into the tiny iPhone frame?

If you hear something before me let me know!