Bigtrak is Back! Now With Rockets and Digi Cam 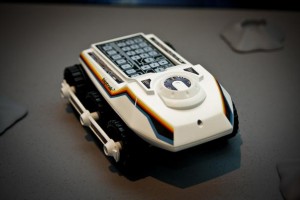 This might be lost on those not around in the early 80’s but this gives me thrills aplenty!

Bigtrak was a marvel – It was a six-wheeled vehicle with a front-mounted blue photon beam headlamp, and a keypad on top.

Yup – this excitement is partly due to the fact that me and my bro never had one.

Back then the toy could remember up to 16 commands which it then performed in order – the new version, Bigtrak Jr, will be half the size of the original but will be able to store up to 32 preset programmes!

Those hoping for an iPhone app or WiFi control may feel a little let down but instead of just dragging a trailer carrying an apple Bigtrak Jr will have an optional digital camera and rocket launcher.

The camera will allow you to take still shots that can then be uploaded into a computer. You’ll have to wait til next year for the rocket launcher.

Both the camera and launcher will cost less than Â£15.

Bigtrak Jr will cost a lot less than its original big brother at a pocket-friendly Â£29.99 – even I can afford that!

Bigtrak Jr and the digital camera add-on should be out in the Summer.

Buy from Bigtrak is back