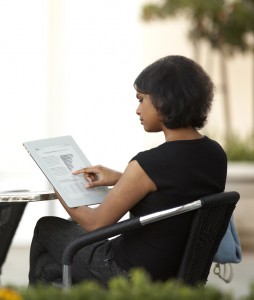 Word is spreading throughout the interweblogosphere stating that Amazon is about to release yet another, larger screened version of the Kindle as early as this week.

Although not currently available in the UK,the New York Times says that the book e-tailer “will introduce a larger version of its Kindle wireless device tailored for displaying newspapers, magazines and perhaps textbooks.”

There’s been no actual comment from Amazon or any of the newspapers included in the supposed deal (including the New York Times and the FT in the UK) – but that small matter hasn’t stopped the NYT reporting that the folk who are willing to talk and are in the know are saying that a new model is on its way pretty soon.

The Financial Times (that pink newspaper) is recorded as saying that they are “looking at this with a great deal of interest,â€ which also suggests that the device could be coming to the UK, finally.

â€œThe severe double whammy of the recession and the structural shift to the Internet has created an urgency that has rightly focused attention on these devices,â€ The FT’s CEO told the paper.

The magazine publisher Hearst and Plastic Logic are also rumoured to be working on an e-reader for their magazine collection.

Many commentators believe an electronic device would allow the papers to once again charge for digital content over readily giving it away for free as they are currently forced to do to compete on the internet.

Could this be the breath of fresh air that the papers and magazines need?

Do you think this is a life-line or noose for the journalistic media?