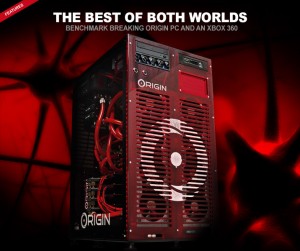 If you’ve got your cash ready and are now trying to weigh up the options of whether to get that high-powered gaming PC or sling down your hard-earned for an Xbox Slim perhaps you should just get both.

Origin PC brings the genius that this The Big O!

The Big O is a hybrid gift to gadgety gamers which combines the fastest computing hardware on the market featuring ORIGINâ€™s expert overclocking, with a built in Xbox 360 Slim.

If the Origin name sounds familiar it’s because I wrote about their EON laptops in February when the ex-Alienware team went on to create the brand.

People seem to be plenty impressed by the Big O:

â€œIf you want the ultimate PC, the Big O is itâ€ said CPU Magazine. â€œBy integrating an Xbox 360, the Big O offers everything and the kitchen sink.â€

â€œWow, we can honestly say weâ€™ve never seen a system like the Big O before,â€ said Ujesh Desai, general manager of the GeForce GPU business at NVIDIA. â€œThe components selected by ORIGIN, including up to quad GeForce GTX 480 GPUs will definitely have gamers salivating for the win.â€

The starting configuration features such tasty morsels as: an Intel Core i7 930 Overclocked to 4.0GHz and an ASUS Rampage III Extreme Motherboard which, along with the Xbox Slim innards, are kept cool by ORIGIN’s High-Performance CPU & GPU Liquid Cooling system. There’s a 6GB Corsair Dominator 1600Mhz for memory, SLI Nvidia GTX 480 for graphics and storage comes in the form of Dual OCZ 50GB Vertex2 in RAID 0 with secondary storage thanks to 2TB WD Caviar Black.

Obviously all this is customisable and you can work alongside an ORIGIN specialist to make a machine fitting your specs but don’t get too carried away – the example of CPU Magazine’s choices bumped the $7,669 ‘Starting’ price up to a tear inducing $16,999!

If Xbox 360 isn’t your particular gaming console of choice then you can opt to have one the others slipped inside.

Apparently this system goes well beyond any mere gaming machine though:

â€œThe Big O will satisfy the demands of even the most power hungry gamer, but when you create the ultimate personal computer system it has to be designed to go above and beyond gamingâ€ said Kevin Wasielewski, CEO and Co-Founder of ORIGIN. â€œFrom the hottest games on the market to digital video editing and 3D rendering you will have the power to perform at every level. To have the best you have to build using the latest in computer technology that guarantees unmatched performance and that is exactly what you get with the Big O.â€