Bic Cristal Stylus – makes use of the chewy end, controls tablets and smartphones 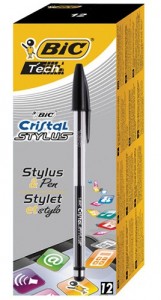 Bic is to release a new version of its world renowned Cristal biro with a re-invented end that can be used to control smartphones and tablets.

The Bic Cristal Stylus has the conventional disposable ball-point pen at one end and replaces the much-chewed opposite end with a capacitive tip.

In other words – you have a choice to use the throw-away Bic on a pad or on an iPad.

The original Bic Cristal was first introduced in 1945 and the company has sold over 115 billion of them since.

However, the French company recognises that many people are now using mobile devices rather than paper pads to sketch and take notes.

Hopefully the new biro will prove to be more useful and better received than the Bic Cristal for Her.

The £2.49 stylus pen will be available from Amazon.co.uk, Asda and Sainsburys from August.

Amazon lists availability as starting on 12 August. You can buy one on its own or blister packs of three. Amazon is even selling a box of ten of them for £17.04

– well, you know you can never find a pen when you need one.