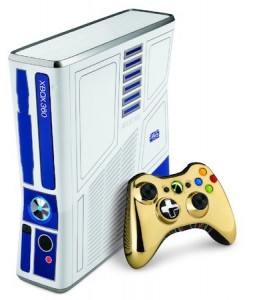 What’s better than an Xbox 360? Well, until the Xbox 720 appears, the Star Wars droid themed Kinect bundle has to be it!

Yup – An R2-D2-themed Xbox 360 with accompanying gold C-3PO controller is what you are seeing right before thine eyes young Padawan.

Both famous droid-styled elements are part of a new Star Wars Kinect bundle that Microsoft officially announced at Comic-Con today.

You also get a matching white Kinect sensor, as well as a 320GB hard drive, and both the Star Wars Kinect and Kinect Adventures games.

All this with custom console sounds will cost you $449 when it lands in Autumn – pre-orders are open now!