Best leaked shot of new HTC One so far 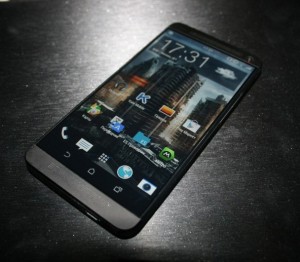 This is probably the most convincing leaked snap of HTC’s upcoming flagship I’ve seen so far.

This peek-a-boo picture of the fab HTC One‘s replacement was supplied (and then quickly removed) by Russian site mobiltelefon.ru.

The design of the M8, or HTC One Plus, is almost identical to the existing HTC One (which I think is faultless anyhow), bar the removal of the front capacitive navigation buttons on the bottom bezel as mentioned previously.

The on-screen buttons can be summoned or removed with a simple swipe gesture, and the extra bezel space appears to have been filled with more screen.

This supports rumours of a 5-inch full HD screen in a body no bigger than the current HTC One.

Other rumoured specs include a Qualcomm Snapdragon 800 processor, 2GB of RAM, Android KitKat 4.4.

The HTC One Plus will also arrive with two rear cameras, which could be used for Lytro-like post-shot refocusing.

HTC is expected to unveil the One Plus at a New York launch event in March, where all will finally be revealed.