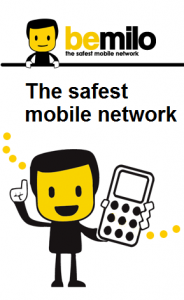 As much as heart new tech, if I was a parent I probably couldn’t help but to be a little concerned at all the new ways my little cherub could find themselves faced by the nasty side of the wonders of the 21st century. Bemilo is taking a stand by helping you protect your little uns on their mobile phones.

Do you want to make sure that your little angel isn’t sexting, even if they’re using SnapChat?  You’ll be able to know now as Bemilo is designed to keep your children safe when they’re using their phone.

A worrying 25% of kids have suffered abuse via their mobile phone. Let’s face it, most bullies are cowards and is there a more cowardly way of bullying someone than online or by text?

Bemilo from Vodafone is a phone network that has set out to combat bullying and inappropriate behaviour by giving parents more control over their precious darling’s phones.

Shove a Bemilo SIM into your offspring’s mobile and you’ll be able to read texts through an online interface, and see if kids are receiving abusive or inappropriate messages.

Parents and Guardians also get the power to block selected numbers, and set the time kids can browse the web.

The grown-ups are even in charge of pay as you go spending too. In case of emergency, a Bemilo phone can ring parents even when out of credit.

As the system sits on the SIM card rather than being an app, Bemilo is always on and crafty kids can’t get around it. Well, unless they have a spare SIM 😉

Its also available to feature phones that don’t support apps, and isn’t confined to any one app platform.

Bemilo doesn’t currently work on BlackBerry phones so if your kiddlewink is hooked on BBM you may have to wait til Autumn when the network plans to launch on BlackBerry.

The Bemilo package costs £4 per month on a month-to-month basis or £3 if you sign up for a year. Calls, texts and data are bought separately, costing 10p for a minute of calling or a text message and 25p for 1MB of data.

Does this sound like protection or intrusion? Teens: how would you feel about your olds reading your texts?