New Belkin Lightning chargers – one is a cheeky dock 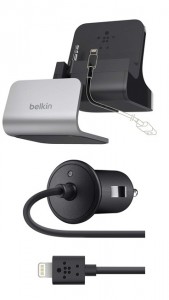 Apple has its tight control over third-party accessories and with the authentication chip in the new Lightning connector it means we will be faced with a slow trickle of official chargers and docks. Here’s the first from Belkin.

Belkin has produced a couple of accessories – one is an in-car charger and the other is a desk dock.

The car charger is exactly what you would expect from an in-car charger.

Shove one end in to your car’s ‘power outlet’ (that’s cigarette lighter to most of us) and the other one goes the Lightning port of your iPhone 5, iPad 4, iPad Mini or new iPod Touch. Simple as that. Just a cable, no dock or other cleverness here. Expect to pay around £25.

Now, the dock… where the car charger is a simple cable with a Lightning connector this isn’t even that.

You do get a dock which can be used for audio out, but unless you snake your own cable through it, it can’t charge.

Yup – this is an iPhone 5 charging dock without the power to charge. Again, this will hit you up for around £25 too but if you intend on buying another official Apple Lightning cable it works out more like 50 notes.

Hmmm… anyone else waiting for more unofficial Lightning docks like this now?