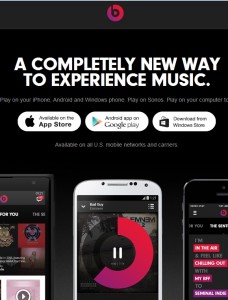 Hippity-hopster and ubiquitous earwear head honcho Dr Dre has launched his Spotify-rivalling streaming service, Beats Music, today in the US with the promise that its recommendations will be more accurate than other music services.

As expected Beats Music has today launched its online subscription service today to take on the likes of Pandora, Spotify, Rdio and Apple’s own iTunes Radio. As well as the Beats Music online service launching, Beats has also launched a new iOS application.

The Beats Music application is a free download available from the App Store and the Beats Music service costs $9.99 a month/$119.88 per year, or you can opt for a 3 months free trial and then a $14.99 Family Plan if you’re with AT&T. Otherwise Beats Music offers a free 7-day trial period for first-time users.

At the moment Beats Music is US only but the service will be hitting more countries “soon”.

One area that Beats Music is hoping to win over users is its recommendations.

“We tried to remember a time a robot found us magic,” says Beats Music in an introductory blog post, “but all we could find were the times the robot made us laugh. “‘You like Pantera? Have you heard of Black Sabbath? You like Mumford and Sons? Here’s another song with banjos!'”

As you can see below, I have been informed by Spotify that Jessie J has a show in Kent amongst recommendations of Decapitated, Isis and such, I can certainly relate to the sentiment that other services are a tad wide of the mark. No, I am not a Jessie J fan and confused by all the other recommendations! 😛 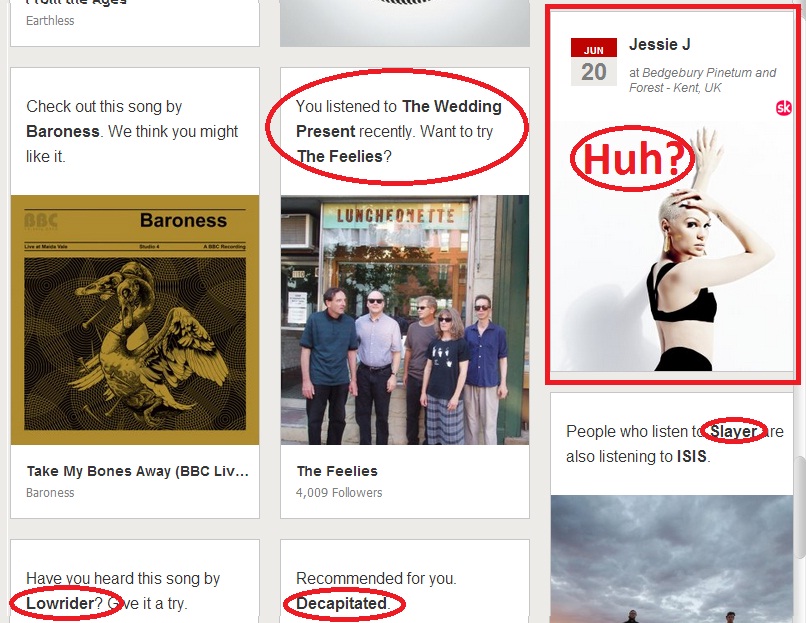 Meanwhile Spotify isn’t about to roll over that easily and has come out fighting with its new virtual merch stands on artists’ profile pages, allowing you to buy t-shirts, physical albums and other merchandise from your favourite earpleasers right there in the app.

The move, announced yesterday, goes some way to answer critics by funneling more money to artists. Spotify also recently revealed how much it pays artists with a new Spotify Artists website.

As Beats Music turns up the volume on its new streaming service this also marks the end of MOG, the streaming service its parent Beats Electronics acquired in 2012 reportedly for $10-15 million, and which forms the backbone of Beats Music: it will shut MOG down on April 15.

“We found that most MOG subscribers only kept a few playlists, so we focused our energies on making Beats Music as good as it could be. It’s worth noting that while Beats Music incorporated many elements of MOG, it was not built directly on top of MOG, so switching playlists and libraries from MOG to Beats is just as difficult as it would be to transfer the same from MOG to any other music service.”

Here in the UK the big players including iTunes and Spotify are competing with an increasingly crowded field of music streaming and shopping services such as Rdio, Bloom.fm, or own brand services tied to hardware like Google Play and Nokia Music.