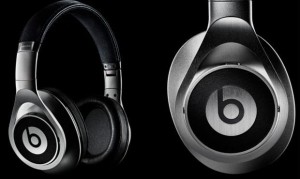 Just as the white tell-tale headphone cable of an iPhone/iPod user became a familiar sight on the daily commute now it is the turn of the read lead dangling from some of Dr Dre’s signature ear-pleasers. The Beats by Dre headphones and earphones a certainly noticeable but not what you’d class as classy (in my opinion). But now there’s the appropriately named Beats Executive.

The Executive are just as chunky as the Solo and Studio headphones but instead of being mug-me-now-red they are much more stylish and wont clash with your tasteful pinstripe suit.

It’s not just a case of a different paint job either. Instead of the mainly plastic shell the Executive gets a suit of brushed metal with grey and black Beats logos replacing the regular red.

These ‘high definition’ cans feature noise-cancelling tech which will allow you to block out all the hoi-polloi as you wait for your driver to pull up with your limo.

One feature that should be added to all active headphones is the Executive’s automatic shutoff. This battery saving addition actually powers down the headphones when they’re not in use. So, if you have to remove them in order to make an important business decision and forget to switch them off they will obediently perform that task for you.

The Beats Executive should land in the UK in time for Christmas but I would expect them to be in Business Class area of the pay scale.

Would you go Executive or do you prefer the look of Nokia’s HD Purity cans which are also made with the help of Monster? Perhaps you prefer the Beats mixr for that DJ one-can look? 😉

You now get the Beats by Dre earphones bundled with the HTC Sensation XE and XL phones – keep posted for a hands on review of the XL soon!