BBC News Arrives for Android Tablets – You Have to Have More than Seven Inches Though! 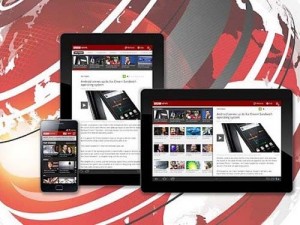 The BBC has been loved on both Apple phones and tablets but, until now, if you were rocking an Android then you could only keep up with world events on your phone. Now, however, the BBC News app will play nice with Android tablets that are 7.2-inches and above

You could enjoy getting the world famous BBC news on your Android phone since May last year – if you fancied checking it out on your droid slate you had to make do with a rather unappetising upscaled version.

There is now a BBC News app made especially for tablets over 7-inches. Yup, if you have a seven-incher then you are deemed to be ok with the standard phone version. I thought that size didn’t matter?

You can now get the BBC news squirted to your Asus Transformer Prime, or Acer Iconia A700 when it comes out, and it will be a glorious tablet-optimised experience.

“Growing numbers of people are accessing BBC News on mobiles and tablets,” said Kate Milner, mobile product manager for News and Future Media at the BBC. “In an average week, the BBC News sites and apps are visited by around 9.7 million users worldwide on mobile and tablet devices. That represents about 26 per cent of the total”.

The app works on your Honeycomb or Ice Cream Sandwich Android over 3G and Wi-Fi – so you can always check on what’s happening in the world.

The app hands you personalised features such as the ability to share stories with friends, to be able to customise the news to suit your interests and discover On Demand video buried within stories.

Aunty Beeb has said that an international version of the app from BBC Worldwide is due to arrive later on this year. Also on the cards is BBC News live action along with a bunch of homescreen widgets.