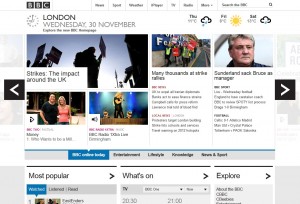 The new BBC homepage (you remember the beta version that appeared in September?) has gone really live – go visit the Auntie Beebs online home and see it now!

Two months ago the beta version of a new UK homepage for BBC Online was launched, for public use and feedback. Today the homepage that’s been running in beta launches in full.

James Thornett, the production manager said that “Results from the beta test site indicate that the majority of BBC websites have received a greater proportion of traffic from the new homepage,” and went on to say “The page is performing as intended following the redesign which is the reason we’re now launching it for all users”.

It certainly looks like the idea of putting the beta up for feedback certainly did its job as three hundred comments were left on the blogs with over twenty thousand responses to their online survey, and over two and a half thousand direct emails.

The minimalist, white-space design is totally on-trend – following in the footsteps of GadgetyNews then? 😉

You get a three-panneled carousel which is navigated by a pair of arrows which would make anyone with a tablet feel very much at home I should imagine. There are simple to use filter options to see your favourite categories as well as location and nation-specific homepages. This is set in the same way in which your weather page is currently set – just bang in your postcode 🙂

You’ll find, at the bottom of the page, what the national treasure is calling “draws” – expandable columns for the most popular stories, a “What’s On” section and an “Explore” section – the latter appears to be a tag index of the site.

It might not be as exciting as having TV controlled Daleks in your living room but it is kinda groovy. So, go and have a play with the new BBC site over at bbc.co.uk.