Battle of the next gen consoles – PS4 v Xbox One infographic 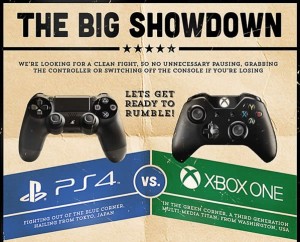 The dawn of gaming’s next generation consoles is getting closer with each passing day (PS4 – November 15th, Xbox One – November 22nd), and many gamers are still trying to decide which system to go with. Now that Microsoft has removed many of the features that irked consumers about the Xbox One when it was revealed, both it and the PlayStation 4 seem to be on more even ground.

The infographic from Xpango gives us a blow-by-blow account of both consoles and lays out both the good and the bad of both.

One of the more interesting factors in making the final decision doesn’t really concern gaming at all, despite these being gaming consoles.

All-around entertainment (i.e. movies, TV, streaming, social media) is beginning to make a larger presence in these machines, the Xbox One in particular – even though the UK will be missing a fair chunk of these services, at launch at least.

The Playstation 4 will be more geared towards gaming (although some of the titles that were planned for launch have fallen by the wayside) and, more importantly to some, will also cost less than its competitor at launch.

Have you already pre-ordered one or both? What was the deciding factor?

For more info on the upcoming consoles, have a look at the graphic below.