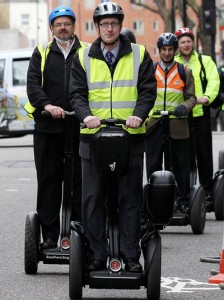 Segways seem to be now limited to use on private land thanks to a recent ruling.

The geeky two-wheeled chariots have been tested by police forces and championed by the likes of Lembit Opik (see picture) but District Judge Michael Rosenberg has deemed the Segway as being a motor vehicle under the Highways Act of 1835.

The personal transports can hit a dizzying 12 mph and were already barred on UK roads having failed to comply with a number of road traffic laws.

It hasn’t been great recently for Segway after the death of a Segway owner in September (also in Yorkshire) and now Judge Rosenbergâ€™s ruling and prosecution of Phillip Coates who was spotted riding his Segway on the pavement in Barnsley by a civilian police inquiry officer late last year. Frankly Coates should feel lucky he wasn’t brought up on charges of witchcraft as well 😉

Rosenberg said that he had: “wilfully rode a motor vehicle, namely a Segway, upon a footpath or causeway by the side of the road, made or set apart for the use or accommodation of foot passengers.”

The Judge added: “In my judgement, the conclusion must be that general use on the roads is to be contemplated. Although this is by no means an easy matter to determine, I am inexorably driven to the conclusion that I am satisfied to the required standard that the Segway is a motor vehicle and the allegation is therefore proved.”

So – Segways on the road or pavement? Personally I think that these charges are a bit steep given the amount of times I’ve nearly been run over by a cyclist on the path. Not yet been hassled by a Segway rider.