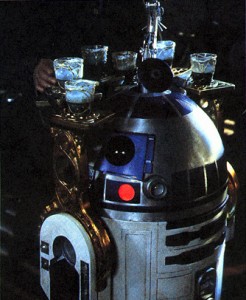 Remember when R2-D2 was taken by Jabba and converted into R2-D-Tray with a drinks holder so that the little droid could serve the guests on the barge? (see pic)

Well, if Jabba had seen this beauty then R2-D2 could’ve stayed unmodified and Jabba’s party would have gone according to plan as I doubt that this robot has hidden weapons.

According to its creator:

The concept for BaR2D2 was born when a friend showed up to an event with a radio-controlled cooler. We joked about taking the idea to the next level and in the Spring of 2008, construction began.

All you’d need is a set of robot pole dancers and a robot DJ and then the droid party is go!

Check out the vid showing Bar2D2 at a party!