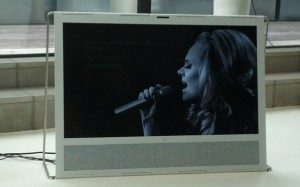 Have you been eagerly waiting for the highly anticipated Apple HD TV to arrive? Well, bet you didn’t think that Bang and Olufsen would be the ones to release it! Check out their new V1 television with Apple TV smarts.

The B&O V1 is part of the company’s ‘Play’ range – this caters for the still-rich-but-not-quite-Premiership-Footballer-rich.

Those speakers are going to be really good knowing B&O. Tue Mantoni, B&O CEO, states that “You can use this to replace any speaker system you have in your house,”.

B&O design sits nicely with Apple’s anti-fussy aesthetics. Danish designer Anders Hermansen was the brains behind the V1’s looks which are constructed around two pieces of sheet metal, folded together.

Hermansen seems to have been quite taken by origami: “I’ve been to Japan and seen how they fold the paper, and I think it’s beautiful,”

Apple TV by B&O though?

Well, the clever Danes have integrated Apple’s set top box in the back!

If you have or are planning to get an Apple TV box you’ll be able to stuff that fruity puck in the back of either the 32 or 40-inch B&O V1 sets.

You see, the V1 has a specially designed compartment in the back which is hidden by a removable panel so as not to ruin the lines.

Naturally B&O’s remote control is able to control every aspect of Apple TV.

The remote doesn’t just stop at controlling the Apple box and the telly though.

The downloadable APIs will enable you to control your PS3, Blu-Ray player and other connected gadgets too!

You can also use the built-in tech to access your iPod or iPad’s content wirelessly, whether you’ve got an Apple TV set or not.

You can put the V1 sets on a table stand, on the floor, have it wall-mounted or even hang them from the ceiling – the power lead can be threaded through the wires by a B&O clever clogs should you so desire.

Now, price. Well, you know how I said that the V1 and the ‘Play’ range is apparently pitched as being B&O’s ‘more affordable’ range of devices? Tue Mantoni is desperate for people in the UK to “get back into spending money,” and spend you shall – the 32-inch B&O V1 is £1,999, and the 40-inch V1 will set you back £2,500. Both are on sale from today.

Would you? Could you? Or, are you waiting to see if the Apple iTV lands in September?