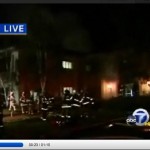 CBS is reporting on a fire that broke out in the middle of the night at the Apple R&D facility in Cupertino!

There was said to be up toÂ 66 fightersÂ at the scene to combat the fire.

Early assesment from Firefighter Deputy Rooney revealed that the fire started under an air conditioning unit.

No one was reported to be in the building when the fire broke out; what a bunch of slackers huh!?!

No Macs, iPhones or iPods are said to have been hurt during the blaze………….