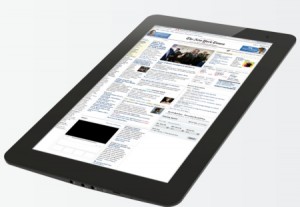 I guessed that after Fusion Garage dismissed Michael Arrington’s and TechCrunch’s involvement with the Crunchpad as being merely another blog on the release of the rebranded tablet, JooJoo, that the sound of lawyers preparing paperwork could be heard in the distance.

As sure as eggs are eggs the document INTERSERVE doing business as TECHCRUNCH and CRUNCHPAD INC versus FUSION GARAGE LTD has been filed.

According to Arrington, much of the key intellectual property – including the board and much of the mechanicals – is owned by Pegatron, the manufacturing arm of Asus.

â€¨â€¨”Pegatron was licensing this IP (intellectual property) back to the project exclusively. Fusion Garage is no longer working with Pegatron, they’ve hired a new ODM. They have likely given Pegatron’s IP to the new ODM to speed development. Pegatron has expressed concern to us about this, and I would not be surprised if they sued Fusion Garage separately over this issue,” claimed Arrington.

“The JooJoo tablet – including the hardware and UI – was built and designed by Fusion Garage. We have been working on [this device] since February 2008,” Chandra told TG Daily. “Remember, TechCrunch originally wanted to acquire Fusion Garage, but that didn’t happen. [It is also worth noting] that [Arrington’s] original [CrunchPad] price point of $200 was utterly unrealistic. In fact, it was little more than a hallucination.” â€¨

My only word of advice would be to hang on before preording the Joojoo for the $500 deposit – I know it’s nice and been a long time in coming as the CrunchPad but if Arrington’s lawsuit is true regarding the lack of Fusion Garage’s sound capital resource then this could end up being a long wait and could involve you kissing your cash goodbye.

Check out the Civil Cover Sheet below if you love litigation 😉