Back to the Future Lego Kit Coming Soon… 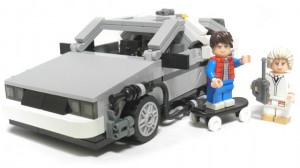 Possibly the best news since hearing that there’s now an official R2-D2 Lego kit is that the Lego Back to the Future set may be happening soon.

That’s right fellow builders – the official Back to the Future kit will include all the pieces to make the three versions of the DeLorean. So, one for each movie, along with the required props and minifigs of Doc Brown and Marty McFly.

OK, it would mean you constructing your own version of Hill Valley and there are no plans to release little Lego Nike Air Mag sneakers – but that’s fine by me.

The BTTF lego set has now acheived the 10,000 votes in Lego Cuusoo.

That means that enough people have shown an interest in this (who wouldn’t?) for the Danish company to evaluate it in order to start an official limited edition run.

If you’re not familiar with Lego Cuusoo then you’re missing one of Lego’s best ideas.

Lego Cuusoo allows fans to submit their own designs and, if they get 10,000 votes, the project gets into the evaluation stage – which means that Lego fans could see their ideas to become real, actual, Lego kits!

Once Lego’s designers build their own version—which needs to meet Lego’s standards for solid construction, and the small metter of licensing gets worked out, the product comes into production and people will be able to buy it in the Lego online store. Cuusoo, roughly translated from Japanese to English, means ‘wish’.